Posted on February 27, 2017 by courtthesport 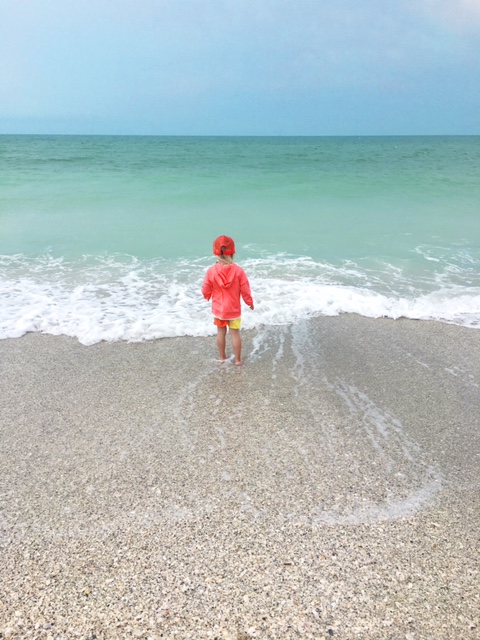 We started our Florida trip off flying into Tampa on Thursday after Emma finished preschool. Emma got the royal treatment on the plane, running into the pilots in the waiting area who gave her wings, a special coloring book and an invitation to come see the cockpit before take off. For some reason, she was timid about it as we boarded. We decided to just say hi to the pilots and wait to try again when we landed.

AJ booked his itinerary separate from ours, so we weren’t able to sit together. Thanks to the United app, Emma watched parts of Finding Dory and Secret Life of Pets making the plane ride go fast. I was able to relax a bit and read some magazines and get a few chapters read in a book I’ve been trying to finish since December.

Emma was still timid getting off the plane, so we settled for a photo of her in the pilot’s hat. I changed Emma into her pj’s in case she fell asleep on the car ride to AJ’s parents condo while AJ grabbed the luggage. We settled down for the night excited to hit the beach the next day.

I got up early and went for a beach run while AJ and Emma slept in. No matter how tired I am, I am always keen to get in a beach run. After breakfast, AJ, Emma and I hit the beach near Holmes Beach where you can possibly find whole sand dollars (I found a few there last year). AJ’s parents were sick, so they opted to stay and rest in the condo. 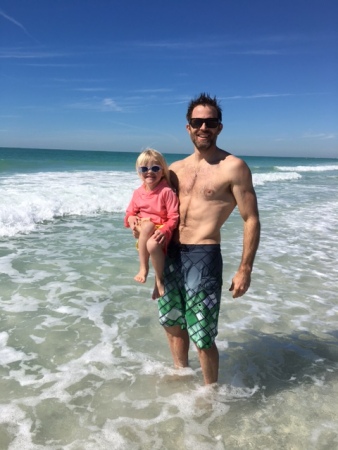 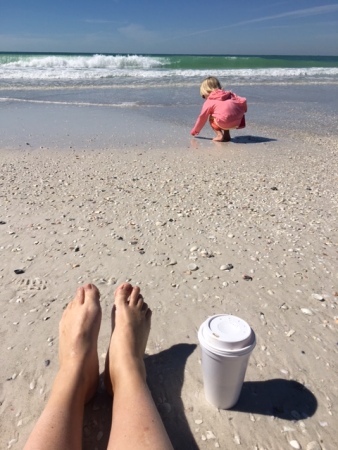 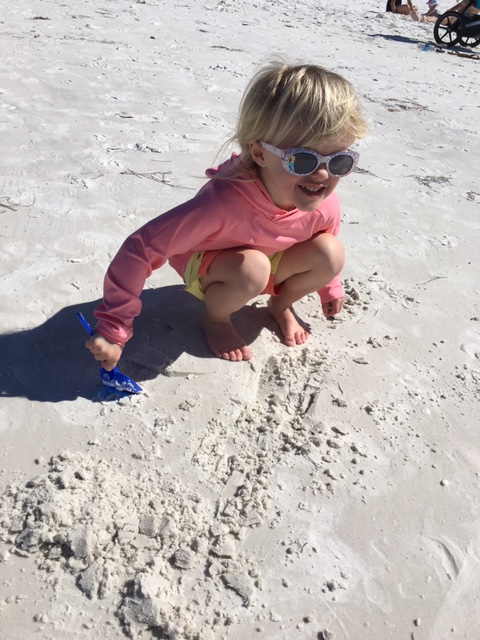 We spent a few hours making a shell house, jumping in the waves and collecting shells for friends. We met AJ’s cousin, her husband and two kids and AJ’s Aunt and Uncle out for dinner- a tradition since we started visiting. We always enjoy the night of seaside dining and walking on the boat docks! 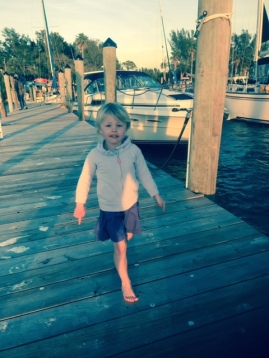 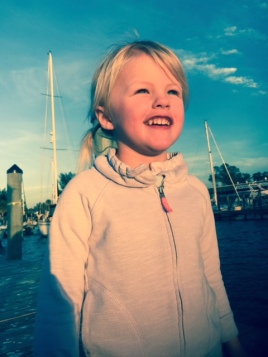 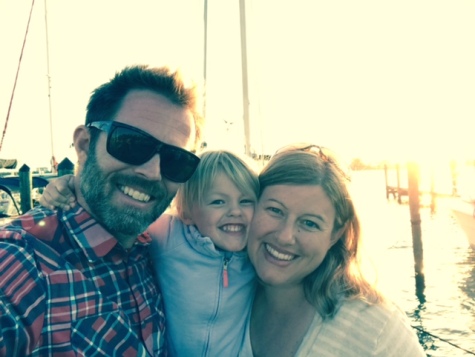 I got up early the next day and ran on the cloudy beach. It called for rain mid-morning, so we hit the beach early.We didn’t last super long out there. We did have enough time to collect shells for Emma’s preschool classmates for her share we she returns. 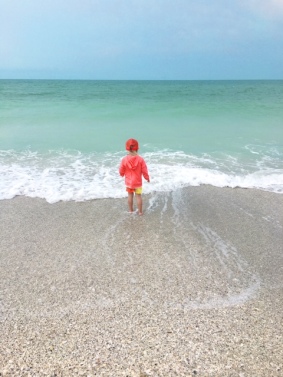 After lunch, we headed to Tampa to see the manatees. They like the water by the Tampa Electric Company because it is warm. Emma got to pet a stingray or two as well. We went to all an you can eat pizza place for dinner. 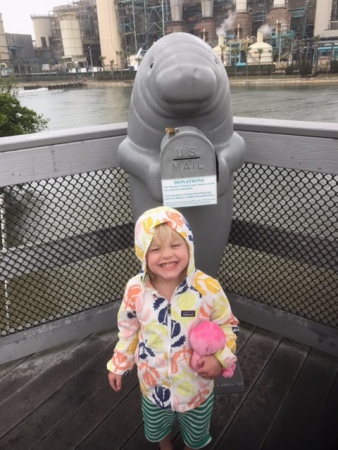 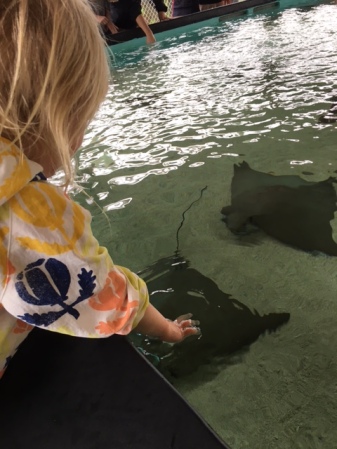 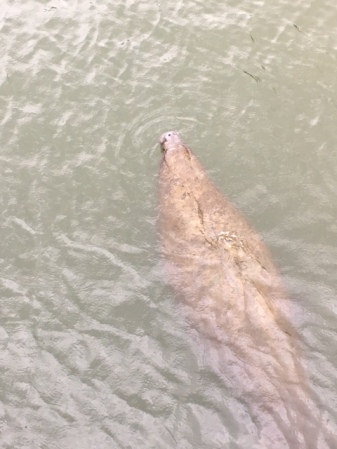 The next morning we packed up and headed down to Naples to meet up with my parents. After lunch, we said our goodbyes. AJ went back with his parents as he was flying out the next day from Tampa. Emma and I hit the pool with my parent’s for a bit before having dinner at home. She did her first flip from the pool edge!

The next day Emma woke up with a little cough. She said she felt fine, and she didn’t have a fever. We hit the beach with Mimi and Papa early before it got too hot. We climbed the rocks and explored the rock pools for sea life. We found some cool shells and even a shark’s tooth. We caught a crab in a net and Emma played a bit with some other kids in the sand. We had a yummy seaside lunch and headed home. 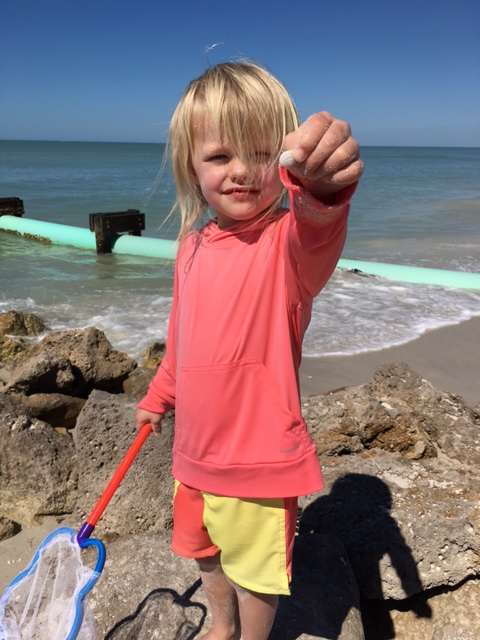 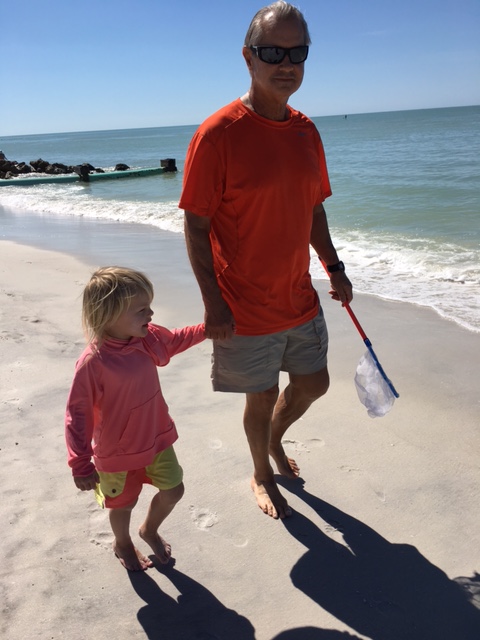 Relaxing at my parent’s place before dinner, Emma’s cough became more prevalent and she began to feel hot. I gave her some children’s Motrin to break her fever. She fell asleep on the way to dinner.We watched the sunset, played in the sand a bit, climbed the banyan trees and found more shells. She ate a healthy dinner and went to sleep no problem. 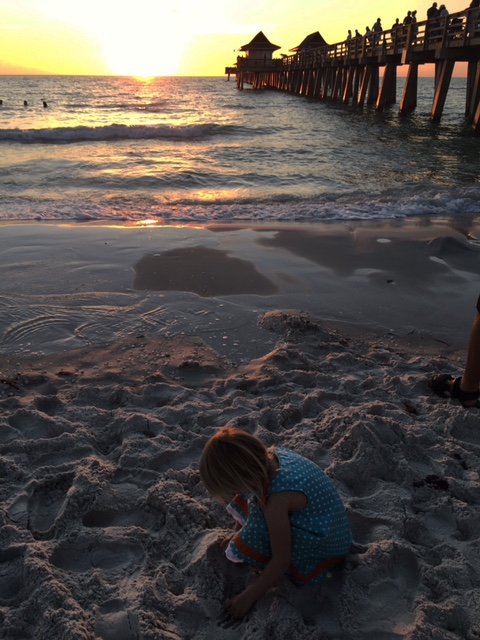 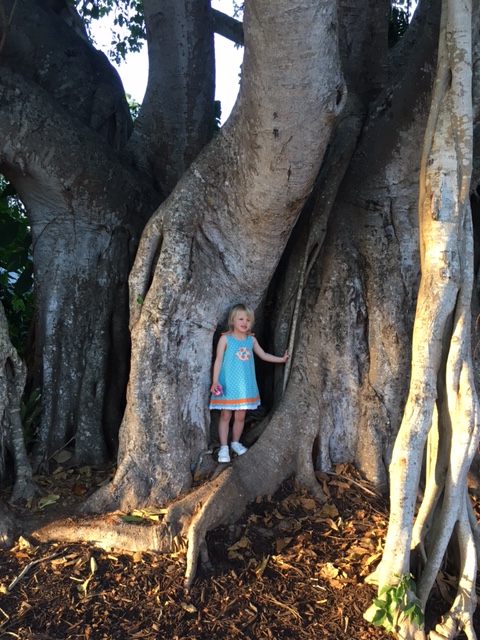 Three hours later, I woke up from her making a bunch of noise. She ended up getting sick several times and her cough began to sound more like a bark. I woke my mom up to help with the bed sheets etc. Emma is rarely sick. It’s been two years since her last sickness, so she took it very emotionally. She kept thanking us and kept saying sorry.

We decided to wait it out till morning and not pay for an ER trip as Emma was falling back to sleep. I spent the night comforting her and tried to get some sleep while crammed into a twin bed.

The next day the cough sounded normal.We spent the day resting and watching a lot of Disney Channel. Her appetite was good and after a nap, she seemed to be back to normal minus the cough here and there. After entertaining ourselves with the lizards, we ordered dinner in and went to bed early. It was  another long night with Emma coughing. 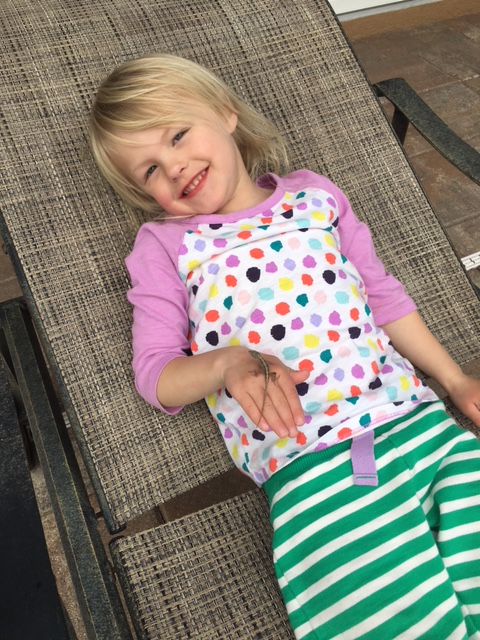 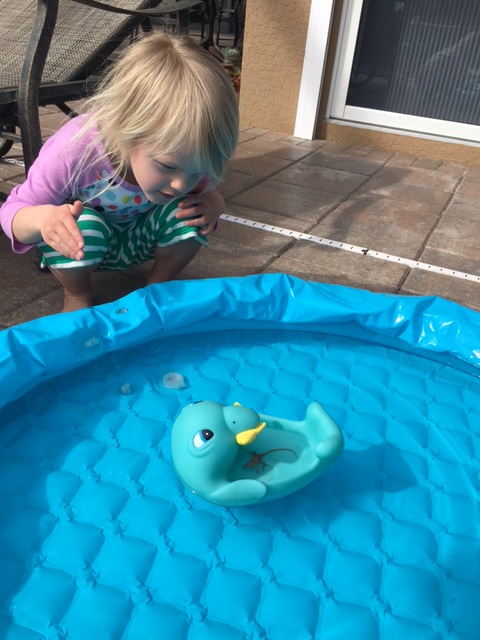 Wednesday it rained from the morning into the afternoon. We went to go see Lego Batman. Emma laid across me most of the movie. We ordered in again to make it easy, and Emma ate her leftover spaghetti from the night before. Emma woke up around 3:00 crying about her ear hurting. I did a google search about local urgent cares knowing we had to get them checked as we were getting on a plane the next day. It was a long few hours watching Caliou (only thing kid wise on at that time) comforting Emma with a warm towel on her ears.

Emma was most upset about having to miss our trip to the Everglades. We went to Urgent Care as soon as they opened and were seen rather quickly. The doctor diagnosed her with a double ear infection and bronchitis. After a quick trip to Publix for some medicine, Emma was feeling so much better. We still had time to make our boat trip reservation, so we took the chance and headed to the Everglades. 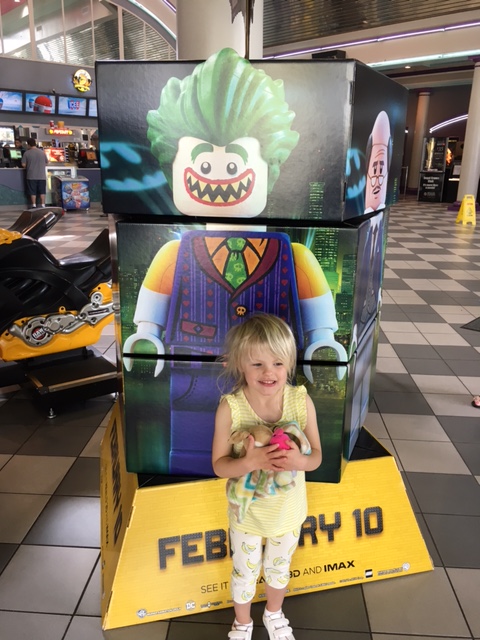 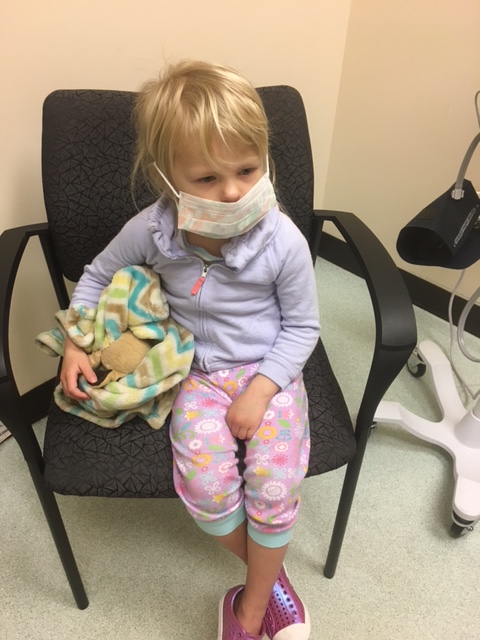 I’m super happy we decided to go down there. Although Emma acted tired at times, she had a great time. Her favorite part of the the trip was seeing all the baby alligators at Wooten’s. 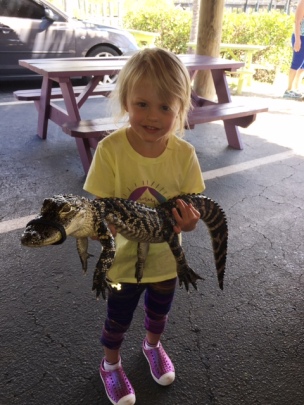 With the current state of affairs, it is more important to me than ever for Emma to see the National Parks before they change for the worse. Emma is also obsessed with this national parks book my mom gave her. A big potential summer family trip in August will mean seeing three more national parks, and our trip to the Sand Dunes in July means seeing another one on the list. 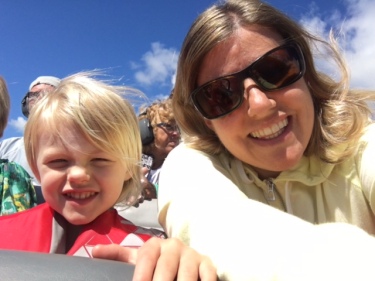 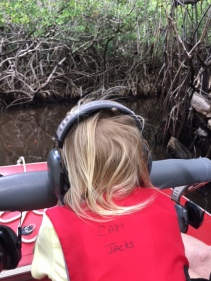 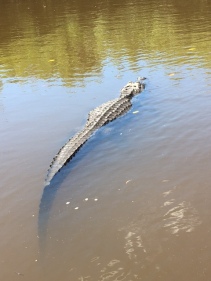 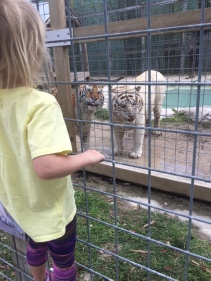 Despite Emma’s sickness, we made the most of our trip and made many memories. That’s the one thing about Emma, she has the ability to make the most of anything despite any downs. I just love that about her!

This week we will get back into routine as I recover from now being sick. Emma is still fighting her cough. I am beginning to work on my first article for a major outlet (more to come), another writing assignment and Emma will be back to classes and school. I’m taking on a fun challenge starting March 1st as a part of my minimalism journey, so watch for a post about that on Wednesday.

adventureswithmylittleray
The Adventures of a Day Hiker