Have Elk Will Bugle

Posted on September 17, 2017 by courtthesport

Life is about to get even more busy for us as I take on a huge project (more about that much later) and AJ takes a step in a new direction career wise and begins real estate school on Monday. So, we took a quick overnight trip to Rocky Mountain National Park to hear the elk bugling.

We went up on Wednesday after Emma had preschool. It was raining as we left Erie (odd) and rain clouds loomed over the national park. We stopped at the Moraine Discovery Center to talk to the rangers about where the elk have been hanging out. They are very often found in the Moraine Valley. So, we headed just down the road and sure enough, there was a herd there. We caught a short amount of action with a bull elk chasing a juvenile bull away from the herd. Other than that, it was bugle free. So, we headed to the Fern Lake trailhead to wait out the rain. It was a short storm, so we headed out for a hike. 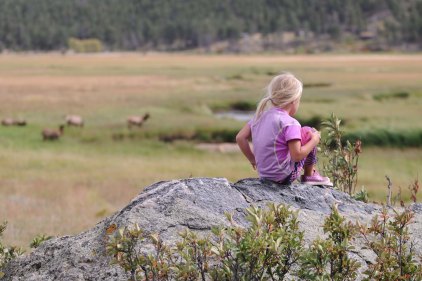 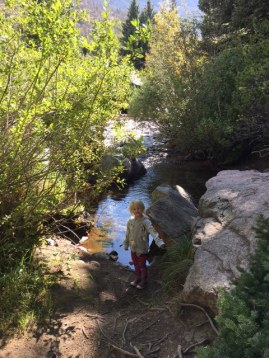 1.5 miles and turned around to make sure we could have dinner and set up the cabin before it got too dark. The trail was nice and was fairly flat with a few rollers, plenty of changing leaves and shade. It also followed the water. 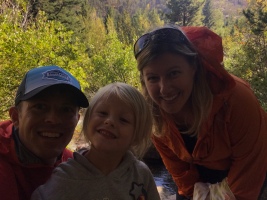 We had some beer samples and dinner at Estes Park Brewery. Because we didn’t get to the camp store at Jellystone Campground before they closed for the night, we had to gather our own wood for a fire. We had a good amount of light left to search for wood and get in some time at the playground too.

AJ got a great fire roaring, so we enjoyed some S’mores and fall beer mixed in with a little rain too. We even read a few books by the fireside. Then it was off to bed to get up early. 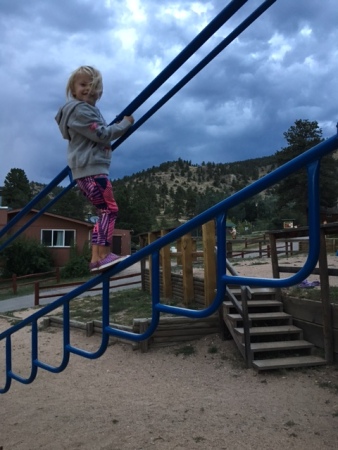 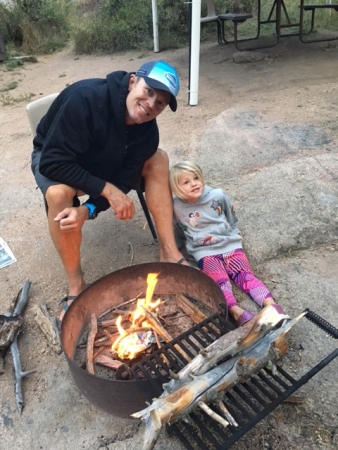 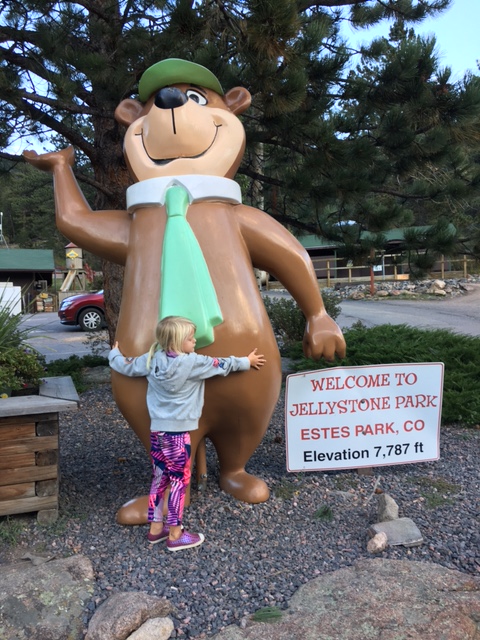 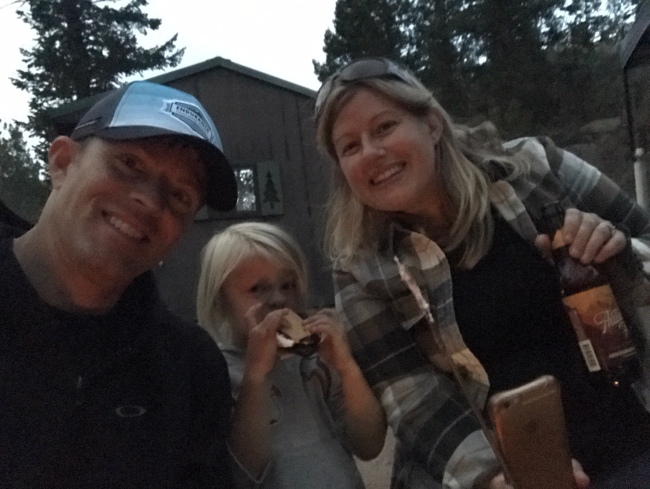 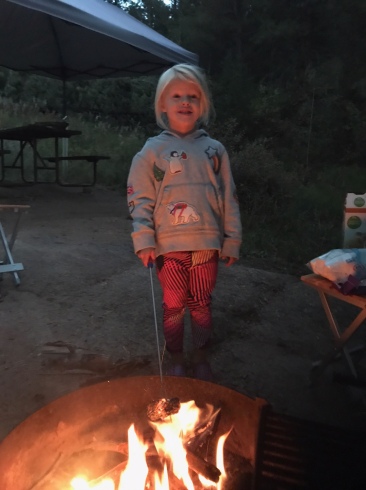 We got up early (before the sun) to find the elk. We had a camp stove fail, so thankfully. McDonald’s was open on the way back into the park. The herd wasn’t in its typical position in the valley, but we did see a 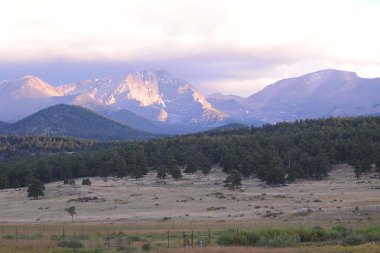 bunch of people parked up the road. We headed there to eat our breakfast. The elk were pretty much on the move up the hillside. We did hear a few short whistles (well AJ and I did as the wind made for a very cold morning and Emma stayed in the car), but then the elk were up the hill and out of sight.

Because it was still too cold, we decided to drive up Trail Ridge to check out the leaves while it warmed up. As we headed up the road, AJ spotted four coyotes trotting on the side of the road. We followed them along (they didn’t seem too phased by cars, people) and happened to watch two of them go to the bathroom in the middle of the room. Lucky us…. 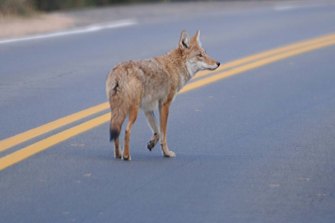 Up the road on a pull off, were a few cars and some elk just hanging out right by the side of the road. We decided to pull over. Within minutes, we heard some bugling. AJ, not being impressed with what we heard earlier, was wowed. Emma was sooo excited, and I felt giddy. There was a juvenile bull, about ten cows and one bull with a large rack. Up the hillside, and across the road, another bull was trying to make his presence known. The two bulls went back and forth bugling at each other. 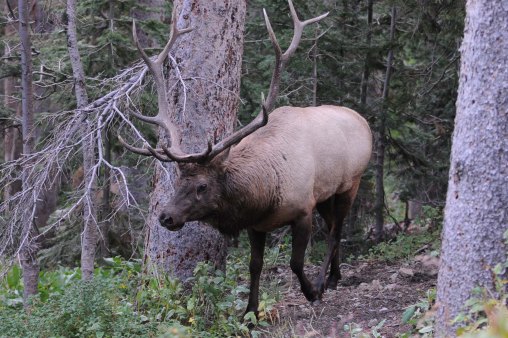 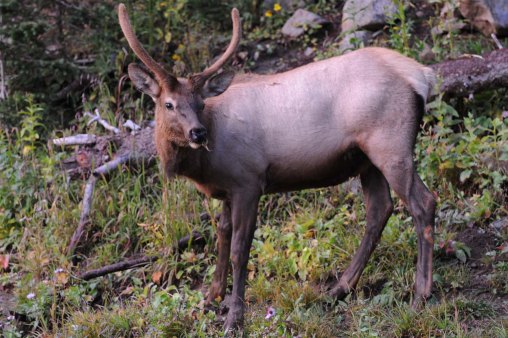 Still cold, we headed up above tree line to see if we could see a few marmots or big horn sheep. No luck, so we headed back down. Some of the elk were back onto the road when we came down, so we stopped again to hear a few more bugles. The bull elk wasn’t cooperating to get pictures, but at least he performed on the bugle side.

We had to be out of the cabin by 11, so we had to get on our hike. We headed to the Cub Lake trailhead and hit the trail. Emma was on a leaf hunt (again) finding leaves all along the trail. The highlight was seeing an elk skeleton on the side of the trail. Emma was intrigued for sure. 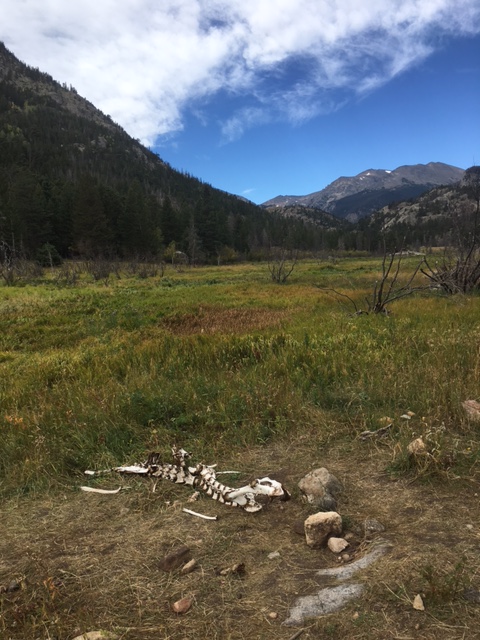 With minutes to spare, we got back to the cabin. Packing up was quick, and Emma got some more time on the playground too. It was a great little get away returning to a place where AJ camped so many years ago with his parents. It looks the same in so many ways but different as well…. We enjoyed hearing about his memories.